The importance of protecting your power delivery system cannot be overstated. The system must be protected against short circuits, surges caused by lightning, switching and overheating. Equipment is available to provide this protection, but it must also be adequately sized and properly installed. Failure to do so could damage the transformer and invalidate its warranty.

The selection and placement of protective equipment within the system is the responsibility of the end user.

Circuit breakers are designed to react to a fault by making a physical separation in the current-carrying or -conducting element by inserting an insulating medium. Breakers come in different types, depending on the insulating medium used. While the most common insulation is oil, air is used in some 600 Volt class circuits. For higher voltages and larger capacities, the insulating medium might be a vacuum or and inert gas such as sulphur hexafluoride.

Specifications for a circuit breaker will depend on the operating voltage of the circuit, the normal operating or maximum load current, and the maximum abnormal or fault current to be interrupted. Circuit breakers are rated in kVA or mVA and express the ability of the breaker to withstand short circuit forces.

Circuit breakers must withstand large inrush currents that result when voltage is initially switched on. These currents can be 20 to 30 times the rated transformer current even with no-load. Therefore, breakers must have built-in time delay for the first 5 to 10 cycles to avoid tripping under “turn-on” currents.

The most common protective device in use, the fuse is basically a circuit breaker that works only once and then must be replaced. When current exceeds the predetermined current value, a fusible link melts, opening the circuit. When voltage is initially switched on, a large inrush current results, being greatest in the first half-cycle of operation, or approximately .01 second. This current becomes less severe over the next few cycles, or approximately .1 second until the transformer is operating normally. Because of inrush current, fuses are often selected to withstand as much as 25 times primary rated current for .01 second, and 12 times primary rated current for .1 second.

The tables provide guidance for selecting fuses when the maximum voltage in the circuit is 600 Volts or less. These tables are included in Article 450-3 of the National Electrical Code covering over-current protection of transformers. If primary protection only is required, use Table 1. If both primary and secondary protection are required, refer to Table 2.

IMPORTANT: These tables are to be used as a guide only. The final determination of application is the responsibility of the end user.

Use this link to find the product you need.

Once Ipri is known, select fuses according to Table 1 or 2 above.

Once Isec is known, select fuses according to Table 2 above. 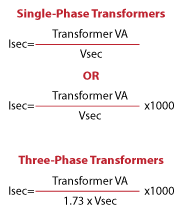